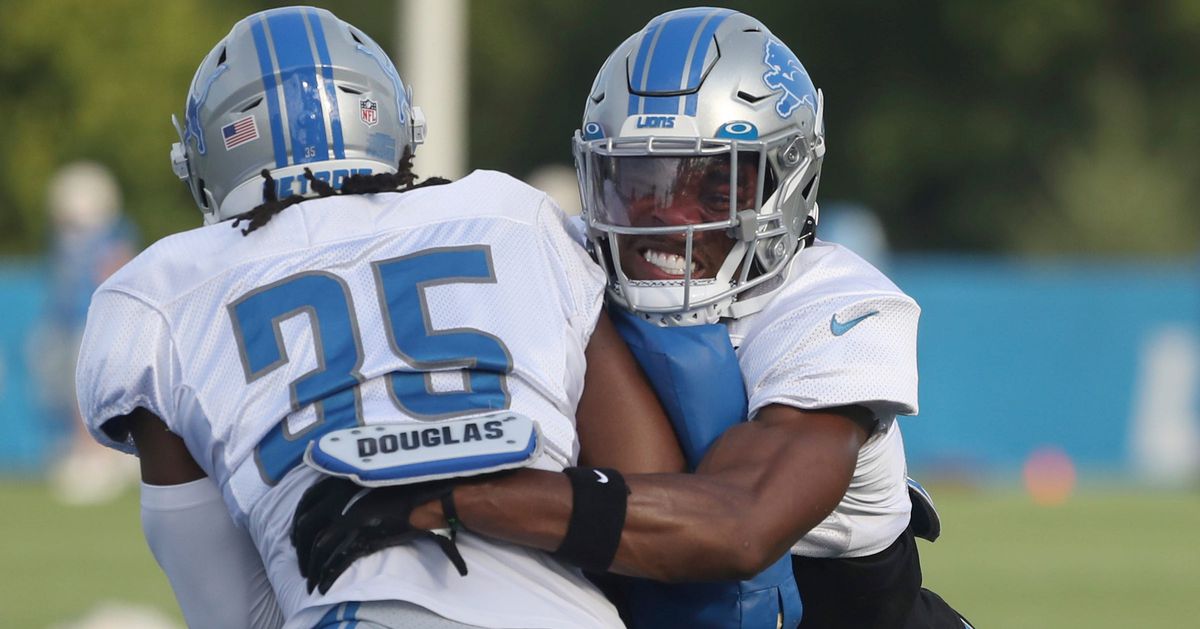 The Detroit Lions were in the pads for the second time during training camp in 2022, and according to coach Dan Cambell during his morning press conference, they planned to increase the energy level on Tuesday.

If you’ve missed any of our camp observations so far, you can find them here:

Tight end Devin Funchess and offensive tackle Dan Skipper returned to full workouts, and while they still weren’t regular players in the rotation, they weren’t kept out of any style of play. ‘exercise. The same cannot be said for rookie tight end James Mitchell, who has been limited to individual drills and 7-on-7 work but has yet to make his 11-on-11 debut as he is still in the re- acclimatization phase.

The Lions were missing two players who were healthy on Monday: tight end TJ Hockenson and defensive tackle Levi Onwuzurike. Hockenson appeared to have a bit of a problem with his walk and generally moved slowly around the training ground, but he assured the media after practice that he was “good” as he entered the facility. Meanwhile, Onwuzurike, who fell in the trenches among a pile of bodies at the end of Monday’s practice, was not present in Tuesday’s practice in any capacity.

During practice, the Lions had two notable players who needed coaching assistance due to injury: wide receiver Quintez Cephus and nose tackle Alim McNeill. Cephus, after pulling off a brilliant one-on-one take, injured his leg and needed two coaches to escort him off the field. McNeill went down to a trench pile, took off a few reps to meet coaches, but was back on special teams the next series and got a sack the series that followed.

Increase physicality/intensity on the training ground

Campbell noted in his morning press conference that he thought the players were a little subdued on Monday after their day off, and while things looked better on film, the plan was to try and increase the team energy level.

To do this, after walkthroughs and stretches, the team embarked on individual drills, then spent the rest of the day alternating between 11v11 and special teams. Typically, the team shuffles 7v7s more, but with the goals they had for the day, they apparently wanted to keep things more competitive and physical.

And they were physically.

Increasing the physique and competition exercises is a double-edged sword. There are a lot of benefits to seeing guys “playing real football”, but you are also walking the injury line. While the Lions have only had two notable injuries – and Cephus’ potentially significant one came one-on-one – there have been plenty of times players have found themselves on the ground for worse – such as in the situation where McNeill was hit.

There were several instances where a player in the trenches went to the ground and it had a domino effect on those around him. Other times, running backs were thrown to the ground by linebackers (hello, Malcolm Rodriguez, again) or safeties who were just supposed to wrap them up.

We also saw Will Harris take a swing at Amon-Ra St. Brown after an 11-on-11 repeat, an incident that was quickly cut short by Kalif Raymond without coach interjection. Harris spent the rest of the day on the second team, but it’s unclear if it was because of this incident, or just part of the planned rotation we saw all camp between him and Jeff Okudah.

But there are also a lot of positives that can be taken from this type of practice. After being whipped by the offensive line on Monday, the defensive line did a very good job of obstructing rushing lanes between tackles, and when the hole presented itself, it was quickly filled by a defender – except one play but we’ll get to that in a minute.

We also got to see an entire 11v11 segment where the defense sent a blitzer on every rep, which forced the offense to make quick decisions and react to pressure. This approach of forcing the attacker to deal with pressure is designed to help the attacker get used to uncomfortable situations and, in turn, should help them down the road. This intensity is difficult to reproduce when it is not in the pads.

At this point, the Lions are piling up days and situations, which will help the team prepare for the regular season. At the same time, you have to hope that if they continue to practice in this way, they can still do so safely and avoid serious injury.

The Lions have different styles of running backs, but on Tuesday they showed they’re capable of getting the results they want with each one. I’m not sure I’ve seen D’Andre Swift lose a one-on-one battle in camp yet. His combination of speed and agility is special and even fast linebackers like Chris Board and Malcolm Rodriguez have struggled to keep up with him.

Godwin Igwebuike’s speed is also very noticeable on the training ground. I know fans are still hooked on two late-season fumbles and an abandoned fourth conversion, but he beat his defender on the sidelines on multiple occasions. It is a remarkable weapon to have in the arsenal.

Craig Reynolds is still RB3, but for the second day in a row, Jermar Jefferson put on a remarkable game worth watching. After a play sweep caused the defense to move, Jefferson slipped a retreating front that fitted the quarterback. When the ball came back to Jefferson, he secured the hold, propelled by a tackle attempt from Saivion Smith, lit the burners on the sideline, slipped a diving tackle attempt from Chase Lucas, and more than 50 yards more late, he was dancing at the end. area. Jefferson needs to keep stacking those plays to stay in the mix.

With the pressure a little on the rise and the defense looking to bounce back after Monday, the quarterbacks did a little more scrambling than we’re used to. Jared Goff, who is the most limited of the three, showed a bit more range than expected, but it’s still not something the Lions want him to do on a regular basis as the results were inconsistent.

As with running backs, receivers with elite speed – like Kalif Raymond – are nearly impossible to cover on individual drills. Raymond may not be in the mix for a starting job right now, but he’s clearly WR4 (with Jameson Williams sidelined) and capable of stepping in when injured.

While we didn’t really see the offense uncork many deep balls, it was a focal point for quarterbacks during special teams drills when working out the side. The three quarterbacks took turns throwing passes over 40 yards to DJ Chark and Josh Reynolds who worked to secure catches in the end zone.

With Hockenson not practicing, the Lions used a rotation of tight ends in the starting lineup, including: Brock Wright, Garrett Griffin and Shane Zylstra. No surprise, those are the exact three names Campbell brought up during his morning press conference when discussing what he was looking for in the close battle.

On the offensive line, the most noticeable change I have seen is in the comfort level of UDFA Obinna Eze who is replacing left tackle with the second team and right tackle with the third unit. It is still under construction, but its exceptional length poses a problem for defenders.

After being beaten by Penei Sewell and Hockenson on Monday, Aidan Hutchinson was much more disruptive on Tuesday, showing his ability to adapt and learn quickly.

“He’ll remember that and I’m telling you,” Campbell said of Hutchinson getting washed by Hockenson. “It can happen one more time and I bet that’s about it. So, because he picks things up pretty quickly, but listen, it’s good to see, it really is. He needs this.

Hutchinson found the backfield several times today, recording what likely would have been an 11-on-11 sack, got a confirmed sack in the final competitive series and pressured Goff to throw an interception at Tracy Walker. He was also put on his butt by Jonah Jackson, but that’s part of the learning process.

In addition to Hutchinson, several other top players created pressure today. Julian Okwara, Austin Bryant, John Cominsky and James Houston have all enjoyed success. Houston got a tackle for loss after using a soft shoulder dive inside, beating the tackle cleanly and driving on the running back. It was one of his most impressive plays at camp and he is slowly starting to make sensational plays.

With Onwuzurike sidelined, Jashon Cornell took his place in the second team rotation. Cornell also had a clean shot on a sack, but it looked like a catch hadn’t been seen by the coaches. UDFA Demetrius Taylor saw a few more opportunities today, and like he did on Monday, he sniffed a screen and used his first-step quickness to close the play.

At linebacker, Jarrad Davis and Derrick Barnes’ downhill speed on blitzes is downright frightening. Davis had several pad/helmet pops today that were significantly louder than any other case, but that shouldn’t come as a surprise as the athleticism has always been there.

“He was another guy who showed up yesterday and we knew he would,” Campbell said of Davis. “You put pads on, that’s his deal man, that’s his game.”

Not to be outdone, rookie Malcolm Rodriguez’s ability to diagnose the play and meet the blocker in the hole is nothing short of sensational. He delivered two notable big shots today, first meeting TE/H-back Nolan Givan in the gap, and slapping Igwebuike on his butt in the open field – something, as previously stated, is no task easy.

The cornerbacks saw some movement today. For the most part, Amani Oruwariye played on the right side of the roster with Jeff Okudah/Will Harris on the other. Today, they have changed sides. Additionally, Mike Hughes saw more reps on the outside and was in a three-way rotation at CB4 with Mark Gilbert and Bobby Price. As a result, Chase Lucas saw time as the second team nickel, supporting Parker. Hughes didn’t look quite as comfortable on the outside today, and with Lucas securing a one-on-one interception, the battle for the nickel corner continues to escalate.

The security group also got their hands on the ball today. Tracy Walker and Ifetu Melifonwu both cut the roads for pass breakups, while Kerby Joseph had a pair of PBUs, putting his hands in front of a receiver on one play and batting the ball on another.