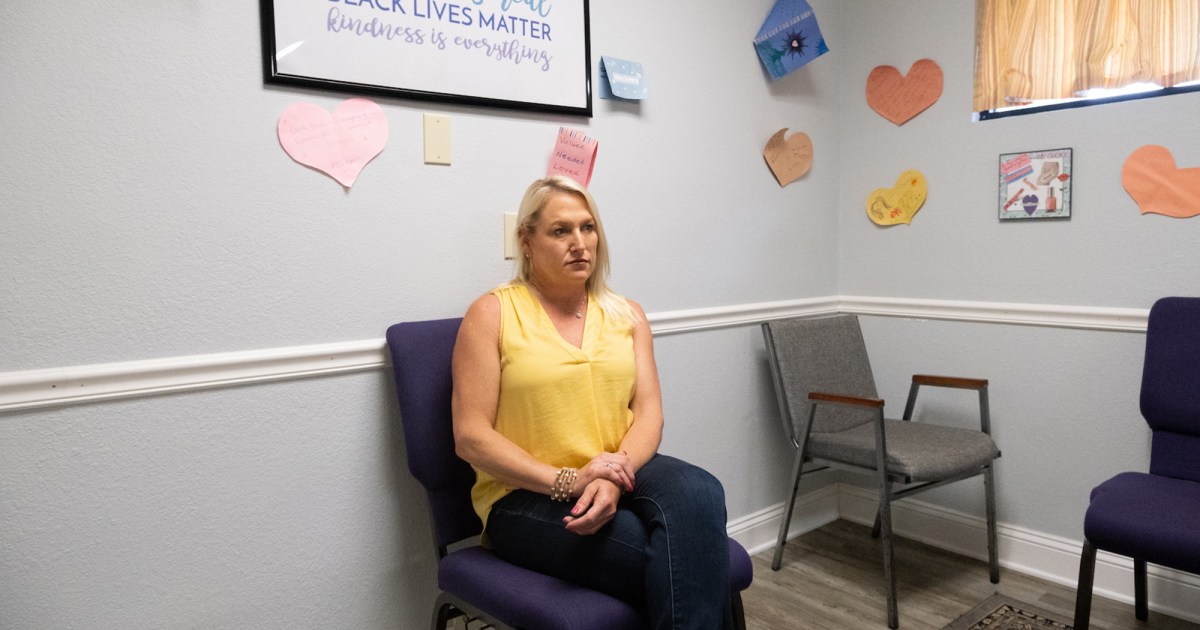 This article is a collaboration between Mother Jones and Reveal of the Center for Investigative Reporting, which is a non-profit investigative newsroom. Sign up to receive their surveys directly by email.

For more than a year, Kelly Flynn had to hire furloughed officers to provide security at her Florida abortion clinic, A Woman’s Choice of Jacksonville, after a local anti-abortion group moved into the nearby vacant building and calls from the police related to harassment have increased.

The change in policy began soon after Reveal from the Center for Investigative Reporting has shed light on an increase in harassment, disruption and violence at Florida clinics amid a lack of state and local protections for abortion providers and patients.

The Jacksonville decision reflects a growing awareness among local, state and federal officials of the growing risks abortion providers and patients will face now that the U.S. Supreme Court has overturned Roe vs. Wade. The decision in Dobbs v. Jackson Women’s Health Organization is expected to spark a new wave of clashes as abortion is certain or likely to be banned in 26 states and the remaining open clinics will offer anti-abortion protesters and extremists fewer and clearer targets.

“We are on the cusp of a sea change in this country unlike anything we have ever seen, certainly when it comes to gender equality and reproductive health care,” said Andrea Miller, President of the National Institute for Reproductive Health, which advocates for legislation to protect the right to abortion. “We encourage states and localities to look at all of their options and be really creative right now and also be really proactive.”

“We are on the verge of a sea change in this country unlike anything we have ever seen, certainly when it comes to gender equality and reproductive health care.”

Some cities are also taking action. The National Institute for Reproductive Health teamed up with advocates in Louisville, Ky., to help pass legislation last year creating 10-foot safety zones for all healthcare facilities, including two abortion clinics in the city. These clinics have stopped providing abortion care now that deer gone, but the safe zone rule remains.

State and local efforts take on added importance because the only federal law aimed at protecting abortion clinics from violence does not cover the new types of harassment and intimidation that have exploded, Revealed report found.

The Freedom of Access to Clinic Entrances Act, or FACE, enacted in 1994, empowers the Department of Justice to bring criminal or civil suits against persons who commit acts of “force” or “threat force” or “physical obstruction” against patients and providers entering clinics. But the FACE law was carefully crafted to avoid criminalizing free speech; anti-abortion protesters have also adapted their tactics to stay within the law. As Reveal found, the federal government has brought only 101 cases under the FACE Act in 28 years, an average of four per year.

The FACE law “isn’t a viable option in many cases,” Rep. Lauren Underwood (D-Ill.) said in an interview. Yet, by passing tough anti-abortion legislation that emboldens protesters, “states have made the political choice to increase the vulnerability of health care providers,” she said. Underwood, a trained nurse, is a co-sponsor of a new bill that would establish a federal grant program to help providers strengthen the physical and cybersecurity of their facilities. The legislation would apply to all healthcare providers – including, for example, those targeted to provide care to the LGBTQ community.

“Just as we protect the Supreme Court, we must protect health care providers, their patients, and people entering and leaving these facilities,” said Democratic Representative Veronica Escobar of Texas, lead author of the bill.

“Just as we protect the Supreme Court, we must protect health care providers, their patients, and those who enter and leave these facilities.

In Florida, West Palm Beach is one of the few cities with clinical protections. A noise ordinance, in place since 2011, prohibits shouting or amplified sounds within 100 feet of any healthcare facility, including abortion providers. But so far, the state’s Republican-dominated legislature has shown little interest in enacting broader protections for the state’s 55 clinics. A Democratic bill to create state law to mirror the federal FACE law failed in 2018. The same thing happened last spring when Democrats tried to weave protections for clinics into a ban on GOP-sponsored abortions after 15 weeks of pregnancy.

But a new Republican-sponsored law could end up inadvertently helping providers. Inspired by high-profile protests outside the homes of Florida Sens Republicans. Marco Rubio and Rick Scott, among others, the measure makes it a second-degree misdemeanor to picket someone’s home “with the intent to harass or disturb that person in his or her abode.”

In signing the bill into law in May, Gov. Ron DeSantis highlighted the protests following the leak of the Supreme Court’s draft opinion that spelled out the end of deer. “Sending unruly mobs into private residences, as we have seen with the angry mobs outside the homes of Supreme Court justices, is inappropriate,” he said in a statement.