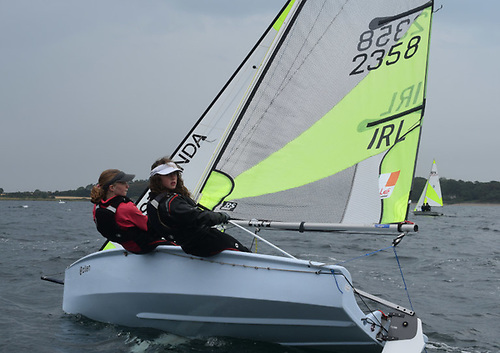 Following last weekend’s RS Nationals, Ballyholme Yacht Club held the first ever open training session of its kind for RS Fevas with the coaches of the RYA of Northern Ireland earlier this week.

There were two sessions on the water at Belfast Lough in Northern Ireland on Monday (August 22) with plenty of shore boat preparation as well as theory.

While some of the young sailors have experience with the Feva, it was the first time for others – and for some it was their first time sailing double-handed.

All participants made significant improvements in their maneuvers and crewwork throughout the day.

Unfortunately, poor weather conditions on Tuesday (August 23) prevented the sailors from getting in the water, but they participated in more theory and some outdoor games and exercises.

A pair ventured out into the bay with a RIB escort and despite some swimming they handled the conditions well.

Baker said: “It was great to see so many enthusiastic juniors keen to sail together and embrace the dual side of sailing. Chris and I thoroughly enjoyed the two days attending what will hopefully be the start of a bright future for the class here in Northern Ireland.

“Hopefully more clubs can take on the Fevas and add to a growing community. It’s a great training boat and with the right sailors on board clubs could send teams to events and really build a thriving class.

He added: “We wish all sailors the best of luck this weekend at the RS Feva Northern Championships as they race in conjunction with the biggest RS event at Ballyholme Yacht Club.

“We also hope to see good attendance for the class at our annual RYANI Youth Championships which will take place September 10-11.”