Companies lagging behind in climate protection 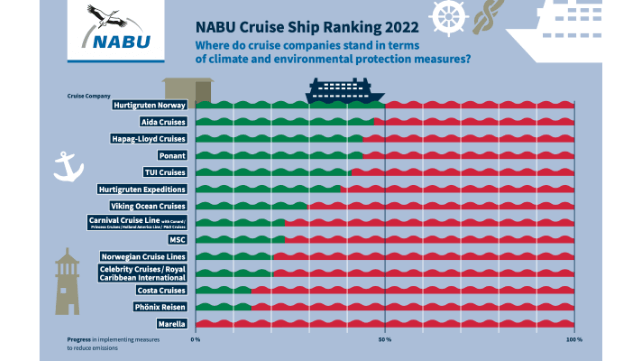 The results of the tenth NABU Cruise Rankings show that cruise brands are still doing too little to protect the environment, human health and the climate. In the ranking, NABU assessed the implemented measures and targets of cruise operators on the path to clean and climate-neutral cruising based on NABU’s roadmap to 2040. Nineteen shipping companies were questioned and a total of 17 points could be scored. However, first place Hurtigruten Norway only got half of the achievable points, with all other companies ranking behind. Among the top five are the three German companies AIDA, Hapag Lloyd cruises and TUI cruises, which can be considered pioneers in particular for measurements on large ships. However, the results also show that companies mainly make promises and announcements, but so far little has been done concretely to improve the situation.

Sönke Diesener, NABU cruise expert: “In the tenth year of the cruise ranking, the results show once again that environmental and climate protection is still not in the forefront for cruise lines. majority of the existing fleet. Only a few truly sustainable projects are in the planning and implementation phase. But the nature and climate crises are putting pressure,” adds Diesener; “By phasing out heavy fuel oil today and making zero emissions the standard for all new-build ships, cruise lines can credibly demonstrate that the announcements of a climate-neutral future for cruise shipping are actually serious.”

The majority of cruise lines have at least one climate strategy to date and are committed to the Paris climate goals. The precursors are beginning to use modern technologies such as batteries and fuel cells. But for now only to complete the combustion engine. TUI Cruises has ordered a ship that should use methanol.

Nevertheless, heavy fuel oil currently dominates the market and order books are almost exclusively made up of fossil LNG carriers. More and more ships are equipped with shore power, but the actual use is still very low. Hurtigruten, Hapag Lloyd Cruises and Ponant are doing well in heavy oil phase-out and shore power. On the other hand, small shipping vessels per passenger do not have a better environmental record. Because there are often far fewer passengers on board ships in the expedition segment. Also, an expedition cruise often comes with a flight halfway around the world. Thus, the personal environmental footprint is ultimately ruined. In addition, they often travel to particularly sensitive regions of the world.

Sönke Diesener, adds: “The Hurtigruten winner shows that cruising on fixed routes in coastal waters makes the necessary climate and environmental measures more predictable and therefore easier to implement. But it also shows that strict regulation helps. Norway has had a strict nitrous oxide regime since 2007, and some fjords may soon only be navigable by zero-emission ships. We therefore need strict regulation at all levels to force a similar development throughout the industry. This includes a general ban on heavy fuel oil, mandatory use of electricity, an e-fuel quota as well as stricter efficiency requirements and the large-scale designation of zero and low emission zones at sea.”

The products and services described in this press release are not endorsed by The Maritime Executive.