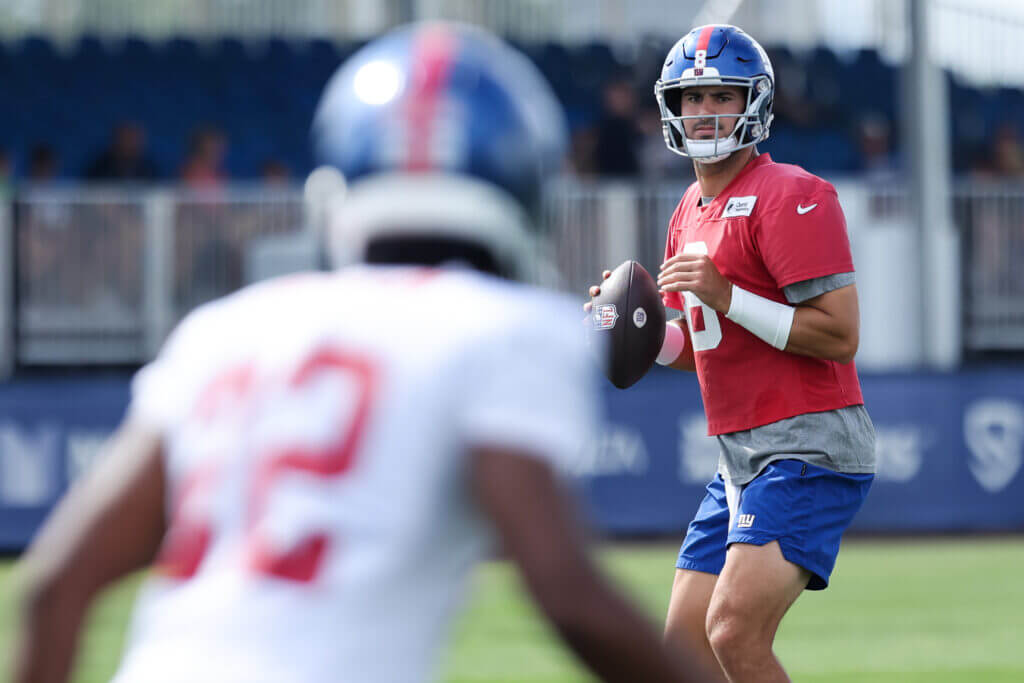 EAST RUTHERFORD, NJ — Giants coach Brian Daboll wanted Friday night’s “Fan Fest” at MetLife Stadium “to be as fun as possible.” So an extended portion of practice was a scrimmage simulating playing conditions. Here’s what happened during the dress rehearsal leading up to next Thursday’s pre-season opener:

Wide receiver Robert Foster, tight end Ricky-Seals Jones and cornerback Rodarius Williams weren’t in uniform for practice (they may have been on the sidelines in street clothes). It was the sixth consecutive missed practice for Seals-Jones with an undisclosed injury. Foster has been sidelined since injuring himself when he landed hard after landing a catch in practice Tuesday. Williams, who is coming back from a torn anterior cruciate ligament, has not participated in team drills since last Saturday.

Offensive lineman Matt Gono remains off the team as he receives further evaluation on his neck. ESPN reported that Gono’s injury will likely end his career.

Rookie offensive lineman Marcus McKethan suffered a right leg injury that looked serious as the cart immediately entered the field for the fifth-round pick. Daboll didn’t get an immediate update after the scrimmage, but it looks like the Giants will be without McKethan, who was working as a second-team guard and tackle.

Wide receiver David Sills ran sprints during warmups but did not participate in practice. Sills was joined by safety Nate Meadors, who was claimed off waivers Thursday.

Running back Antonio Williams returned after missing practice with a knee injury.

Outside linebacker Azeez Ojulari, who has been on the non-football injured list since the start of camp with a hamstring injury, remains sidelined. Ojulari should be ready to return to training by next week, according to a source.

• Daboll handled training like a dress rehearsal for a game. Aside from an extended special teams period at the start of practice, warm-ups mirrored the pre-game routine.

The first team offense had two long runs against the first team defense. Quarterback Daniel Jones completed 12 of 22 passes for 112 yards and a touchdown in an uneven performance.

Jones’ first pass was a loop to Kadarius Toney that should have been intercepted and returned for a touchdown by Adoree’ Jackson, but the cornerback dropped the pick. Jones then hit wide receiver Wan’Dale Robinson with the shot down the middle for a 28-yard gain, although blitz slot cornerback Darnay Holmes likely would have had a sack if contact with the quarterback had been authorized. Jones’ next pass was behind running back Saquon Barkley in the flat and nearly intercepted by linebacker Tae Crowder.

The 13-game record was extended by a defensive holding penalty on Holmes on a third-and-5 incompletion. Jones’ accuracy remained erratic, but a 20-yard run moved the ball towards the 7-yard line. The practice ended when wide receiver Kenny Golladay failed to get both feet inbounds on a well-thrown back shoulder fade by Jones on fourth and 3 on goal.

The other starters practice was an epic 17-game slog. Rookie outside linebacker Kayvon Thibodeaux was a threat on the drive, shooting a pair of hold penalties. The defense constantly created pressure, often with unblocked blitzes. Safety Julian Love reportedly had a sack on a play that resulted in a 13-yard completion to Golladay on third-and-12. Love had a nice play to knock the ball out of Robinson’s hands to force an incomplete later in the drive.

The aggressiveness of the defense turned against a screen pass to Barkley in the third and thirteenth. Barkley had let guard Shane Lemieux provide an escort to a huge open field on the 21-yard gain.

Golladay used his size to box cornerback Aaron Robinson for a 9-yard gain on a tilt on third-and-7 in the red zone. The offense eventually faced a fourth and a goal from the 1 yard line. Barkley was joined by four tight ends, including rookie Andre Miller, who grabbed a touchdown in the right flat after initially blocking to sell a false play.

Center Jon Feliciano, who was returned to action after missing four practices, left midway through the second practice and was replaced by Jamil Douglas. Jackson left late in the ride with what Daboll said was cramping.

• No. 2 quarterback Tyrod Taylor had three series. The first drive was a three-and-out, while the second set ended with a 5-yard touchdown pass to wide receiver Richie James at fourth-and-out. James went into orbit before the snap, caught a swing pass in the left flat and used his speed to get into the end zone.

• No. 3 quarterback Davis Webb had three series. His first drive ended with a 30-yard field goal from Graham Gano. His second drive was highlighted by a 29-yard pass to wide receiver Keelan Doss on a fade against cornerback Darren Evans. Evans got revenge later in practice, deflecting a Webb fade to Doss in the arms of safety Yusuf Corker for an interception. Webb’s last drive ended in a turnover on the lows when his fourth fade against Doss was knocked down with cornerback Zyon Gilbert in tight coverage.

• It was obvious that wide receiver Darius Slayton was running with the third team offense. Robinson, Golladay and Toney were first-team receivers. James, Collin Johnson and CJ Board were second-team receivers, and they rotated sporadically with starters. Slayton spent most of the night on the third team with Doss, Proehl and Alex Bachman. Slayton got a few reps with the second string late in the scrum, but it still looks like it will be a tough climb for the fourth-year pro to make the roster.

• Rookie Daniel Bellinger was clearly the No. 1 tight end. Chris Myarick saw action with the starters in rare sets of two close finals. Miller lined up as a fullback in the jumbo goal line formation.

• Inside linebacker Blake Martinez played the first series with the starting defence. Rookie Darrian Beavers took Martinez’s place with the starters in the second round.

• Rookie cornerback Cor’Dale Flott was oddly the third team cornerback. The third-round pick opened camp as the No. 2 slot corner, but was behind Khalil Dorsey on Friday night.

• The last two practices for the third strings featured a full tackle on the ground rather than the “noise” tempo used for the rest of camp. Daboll said these players would see the most action in pre-season, so he wanted to prepare them for live contact.

• There was a lot of confusion when the punt team arrived on the field after Taylor’s first practice was blocked. Friday’s game setting was a good dress rehearsal for game day operations for Daboll, who has never been a head coach at any level. There were a ton of penalty flags in an overall sloppy performance.

• It is interesting that Daboll criticized his team’s fitness level after the scrum as he ran a rather light side. It will be interesting to see if he steps up the conditioning, like the wind sprints, next week.

game of the day

Webb threw a fade into the end zone to Doss from the 15-yard line. Evans hit the underpass straight into the arms of Corker, who made a long return to the sideline.

quote of the day

“He’s hard to block. He has done a very good job these last few practices to get his feet under him. He has a variety of pass-rush moves. –Coach Brian Daboll on rookie linebacker Kayvon Thibodeaux

The Giants are out Saturday. They will hold their next practice Sunday at 10 a.m. The meeting is open to supporters.