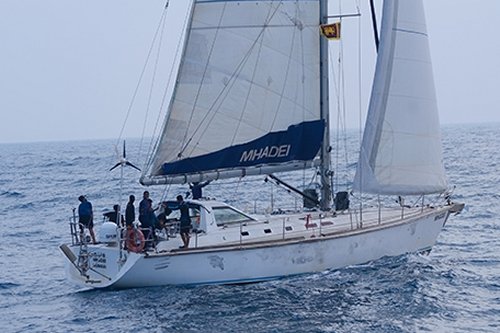 Five Indian Navy sailing ships Mhadei, Tarini, Bulbul, Kadalpura and Hariyal along with the escort vessel INS Sukanya arrived in Trincomalee on March 10. Offering an officer training sailing experience under the guidance of trainees from the Sri Lankan Navy, the sailboats arrived at the port of Colombo on March 16.

Sailboats ‘Van de stadt Tonga 56’ and ‘LC Class 40’ – INSV Mhadei, INSV Tarini, INSV Bulbul, INSV Kadalpura and INSV Hariyal arrived in Trincomalee with a crew of 30 and stayed in the port town on the coast is from Sri Lanka for 03 days, engaging in training programs.

Subsequently, they sailed for Colombo with 11 officers under trainees, 02 midshipmen and 01 instructor officer from the Sri Lankan Navy on 13 March.

The training engagement was to promote naval ties between the two countries and enhance best practices and procedures beneficial to future naval officers, the Sri Lankan Navy said.

Upon completion of the training programs, the Indian Navy sailing vessels were due to leave the island on March 19.