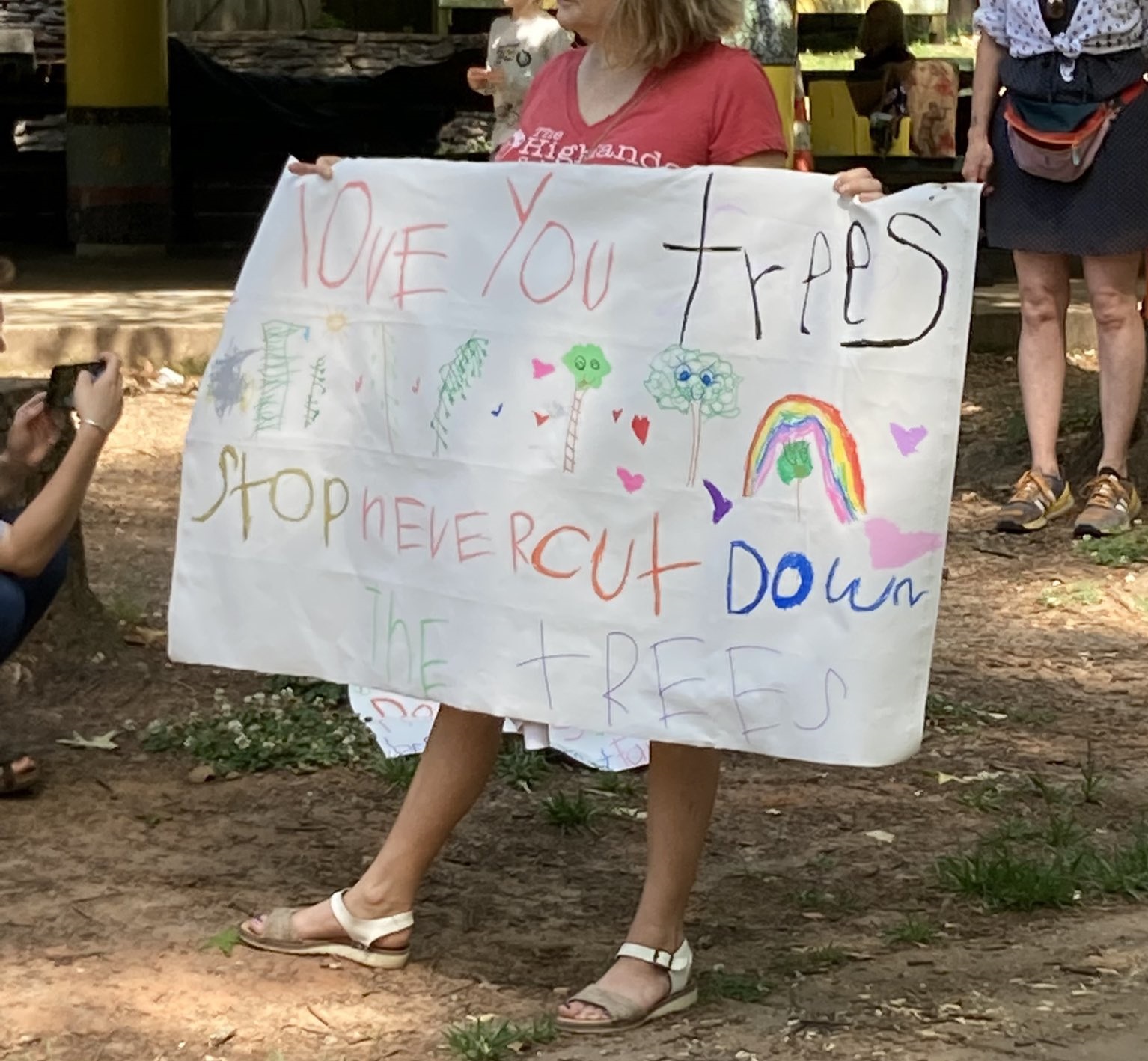 Days of escalating protests against the controversial Atlanta Public Safety Training Center culminated on May 17 in multiple arrests for trespassing on the site and the cancellation without notice of a committee meeting. community review.

Various groups united as Defend the Atlanta Forest for months have protested what they call “Cop City” through peaceful means and sometimes not. The effort had previously led the Atlanta Police Department (APD) and the Atlanta Police Foundation (APF), the nonprofit organization in charge of planning the facility, to state that details of the construction will be kept secret for security reasons and that the FBI is investigating the opposition.

The $90 million facility, which would train Atlanta police and firefighters and field services, is planned for 85 acres of the former Atlanta Jail site, property owned by the City of Atlanta but located outside the city limits in unincorporated. County of De Kalb. APD has used the site for decades for a firing range and explosives disposal. But his selection for the massive training center in a secret city and APF process revealed surprised neighbors and DeKalb officials last year, generating huge controversy.

The facility has also drawn both support and protests due to its timing, following the 2020 national debate on systemic police brutality following the killing of George Floyd and the need to respond to a surge in crime. . The APF, which has been discussing such a facility for years, seized the political moment to get the facility approved, calling it crucial to crime response and police morale. Opponents have denounced the loss of potential forests and parks as well as the facility’s size, cost and training programs as a step back from police reform.

The May 17 flashpoint came as authorities attempted to escort workers to the Key Road site in DeKalb County for construction readiness work under a permit applied for in April. This drew opposition from new protesters as well as many campers in treehouses and tents in the wooded site. The FBI was involved in the large law enforcement response for reasons an agency spokesperson did not explain.

The latest site plan for the Atlanta Public Safety Training Center, as presented at an April 26 meeting of the Community Stakeholder Advisory Committee.

The APD said it arrested seven protesters, mostly out-of-state residents. (The department initially said there were eight arrests and did not explain the lower number it released the next day.) officers’ guidelines. However, the APD also said no one was injured and no one was charged with a violent crime or resisting arrest. All seven arrests were for trespassing, with one person also accused of giving a false name to police.

According to APD, one of those arrested is from Gainesville and the others are out of state. They are from Minneapolis, Minnesota; Philadelphia Cream; Sea Cliff, New York; Sykesville, Maryland; Wooster, Ohio; and Worcester, Massachusetts. APD did not respond to a SaportaReport whether any of these out-of-state residents also have a residence in Georgia.

At a press conference called near the site the same day by the Atlanta Solidarity Fund, which supports those arrested for protesting, various protesters denounced the ODA’s attempt to portray the movement as not local while claiming that the sprawling facility has indeed become a national controversy. They also played down reports of violent activity, although the APD later released a video of two Molotov cocktails thrown from woods over a fence. One of the incendiary bombs hit the fence relatively close to some officers, who did not seem particularly alarmed and stayed put, not pursuing the thrower, as the fuel was burning on the ground. The other approached a parked car when no one appeared to be in the immediate vicinity.

Protesters also complained about the heavy police presence, which they said included helicopters, SWAT teams and police dogs, illustrating the militarized policing they oppose and fear will be taught in the ‘establishment. They said officers had demolished most of the treehouses, but were vague about whether protesters remained camped at the site.

The FBI has been involved in security planning for the facility since April at the request of the APD, the APF previously told CSAC, and is among the agencies that suggested erecting a perimeter fence that planners and the community do not want. The FBI was also on the scene May 17 at the request of the APD, confirmed agency spokeswoman Jenna Sellitto. But she wouldn’t explain why the federal agency was involved in a local trespassing case, beyond the FBI’s legal authority to respond to such requests and the general interest in law enforcement. and criminal intelligence. She specifically would not comment on any FBI concerns about terrorism or attacks on law enforcement officers, which are federal crimes, and said the agency would not comment further. 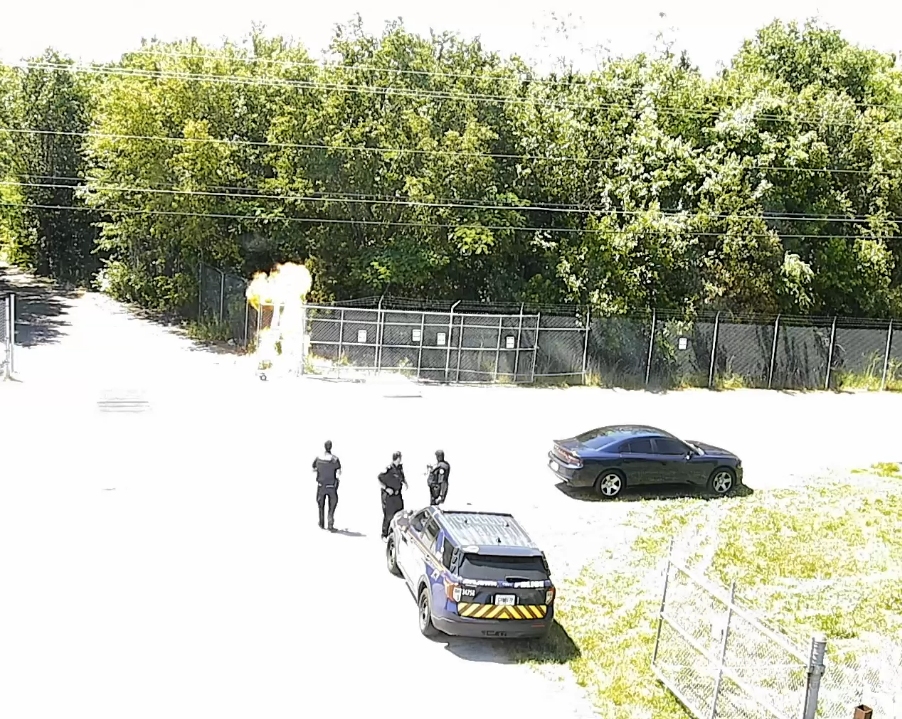 A Molotov cocktail explodes against a fence near police officers during a May 17 clash with protesters over construction work at the site of the Public Safety Training Center in DeKalb County. The image is a still from video released by the Atlanta Police Department.

“Our efforts are focused on identifying, investigating and disrupting individuals who incite violence and engage in criminal activity,” Sellitto said, speaking broadly of the FBI’s legal role. “We are not focusing on peaceful protests.”

“The FBI is constantly collecting and sharing intelligence with our law enforcement partners and is always alert to any potential threats,” Sellito said in response to questions about terrorism. “We do not comment on specific intelligence products or confirm or deny the existence of investigations.”

Some of the protests have included intrusions and vandalism at the headquarters of the APF and its former contractor, Reeves Young. On-site activities include roadblocks and tree houses intended to stop construction. Anonymous notes and social media posts referred to “tree planting” on the site, an eco-terrorism tactic of driving spikes or nails into trees to damage any tree-felling equipment. trees.

Many protests and related events have been peaceful, including activity over the past weekend around the city and at or near the site. They included protests from corporate backers at venues such as an Atlanta United game. Some of these events have centered on the site as the “Weelaunee Forest”, believed to be the Muscogee Native American Nation name for the nearby South River. A few other arrests were made during a protest march over the weekend, as covered by Unicorn Riot, a left-leaning independent media collective that is part of the national news outlet on the story.

The protest is also partly aimed at the expansion of the nearby Blackhall Studios cinema land into what was once part of Intrenchment Creek Park. Protesters claimed on May 9 that illegal bulldozers were performing in the park for this project, also with a DeKalb County police escort. The department did not respond SaportaReport requests for information on these claims, although a permit inspector indicated that he was looking for the site.

Complaints from protesters are also how DeKalb planning officials learned of early test work at the site, as SaportaReport previously revealed. The work appears to follow state and county licensing guidelines.

The May 17 clash came the same day as a scheduled meeting of the Community Stakeholder Advisory Committee (CSAC), a planning review body created by the Atlanta City Council in response to heated controversy over secret installation site selection. The May 17 meeting was canceled without any form of public notice, including on its website or via an email update subscription that hasn’t sent anything since it was announced three weeks ago. A CSAC member that day said SaportaReport the meeting was still going on and an agenda had circulated internally before confirming that it was indeed cancelled. The meeting has now been postponed to May 31, the APF confirmed the following day.

The CSAC had other transparency issues, including an initial meeting without public notice and short-lived discussions about banning members from speaking to the media. He has often overlooked or not received key information about the plan, including an application last month for a county land disturbance permit to begin preparatory work for large-scale construction. And the APF told members at a meeting in April that construction timelines would not be communicated to the group for security reasons. APF and APD officials also said unilateral changes such as a fence could be added due to the protesters. Some CSAC members are themselves opponents of the facility, although the group itself is legally bound to work towards its completion.

The roughly 300 acres of former Prison Farm land the facility will not use is loosely designed as a public park linked to the South River Forest, a vision to create and connect 3,500 acres of parks and other spaces greens in Southeast Atlanta and DeKalb County. Public participation in this process recently began with an online survey.