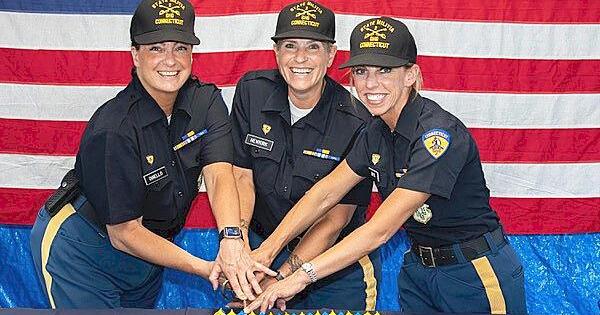 Second Company Governor’s Horse Guard (2GHG) recruit graduation was held at 2GHG Fairfield Hills on 26 June. It was the culmination of five months of training, which took place every weekend from February. Training included drill, mounted and dismounted ceremonial drills, and equine studies.

Cadets Josephine Fico-DiNello of Newtown, Melissa Sipos of Newtown and Nancy Newkirk of Danbury received cavalry spurs and diplomas. State Representative Mitch Bolinsky and second draftsman Ed Schierloh joined former COs and other distinguished guests, as well as cadet families, in honor of the new soldiers.

The 2GHG is an all-volunteer state-organized militia unit originally formed to protect and escort the Governor. As an active cavalry unit, 2GHG continues to serve the Governor and State of Connecticut under the direction of the Connecticut Army National Guard, under the command of the Adjutant General. The unit’s primary duties are as a ceremonial unit, participating in parades, and public educational service in schools, scout groups, and special needs.

One of the oldest continuously serving Cavalry units in the United States, 2GHG was chartered in 1808 and has had a history over the years of dedicated service and preservation of the Cavalry in Connecticut. 2GHG always remains mindful of its responsibilities to the citizens of Connecticut and grateful to those who have made its existence possible.

The Second Company Governor’s Mounted Guard presented cavalry spurs and graduation certificates to Privates Josephine Fico-DiNello, Nancy Newkirk and Melissa Sipos, who all participated in a cake-cutting ceremony during the graduation ceremony for recruits to the Mounted Guard on June 26.